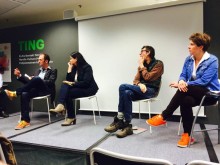 Director, Alastair Cole, and producer, Nick Higgins have been selected by the European Documentary Network (EDN) to take part in a rough cut feedback session with multi-award winning editor Nils Pagh Andersen, editor of the Oscar nominated The Act of Killing.

Alastair and Nick will screen excerpts from their work in production feature documentary, The Colours of the Alphabet.

We Are Northern Lights screens in Helsinki

We Are Northern Lights has been selected to screen at the 2015 edition of Docpoint: The Helsinki International Documentary Film Festival.

Colours of the Alphabet

We are delighted to announce that we are working with director Alastair Cole and New Zealand based Tongue Tied films as producers on the forthcoming feature documentary, The Colours of the Alphabet.

Filmed over 12 months in rural Zambia, The Colours of the Alphabet explores the universal issue of multi-lingual education. In a country of 72 indigenous languages, we follow three Zambian children and their parents as they ask the question, must the future always be in English?